On anger, misunderstandings, and hearing with different ears

Anger is a feeling that is mostly taboo in our society. People tend to think that anger and rage are the same thing and reject anger. We are taught to suppress it. But: “The suppression of anger can cause a lot of trouble, giving rise to virulent progeny such as malice, passive aggression, hostility, rage, sabotage, hate, blame, guilt, controlling behavior, shame, self-blame, and self-destruction.” (Quoted from: Anne Katherine, “Where to draw the line”).

Anger is a normal feeling with a super power: it gives us the energy to change a situation that we consider to be unsustainable. We can express the feeling of anger verbally by saying for example: “That thing makes me really angry”, “I can’t talk right now, I am very angry about what I just heard”.

Let’s also note that there may be other feelings lying below anger, such as sadness, frustration, grief, fear, etc. 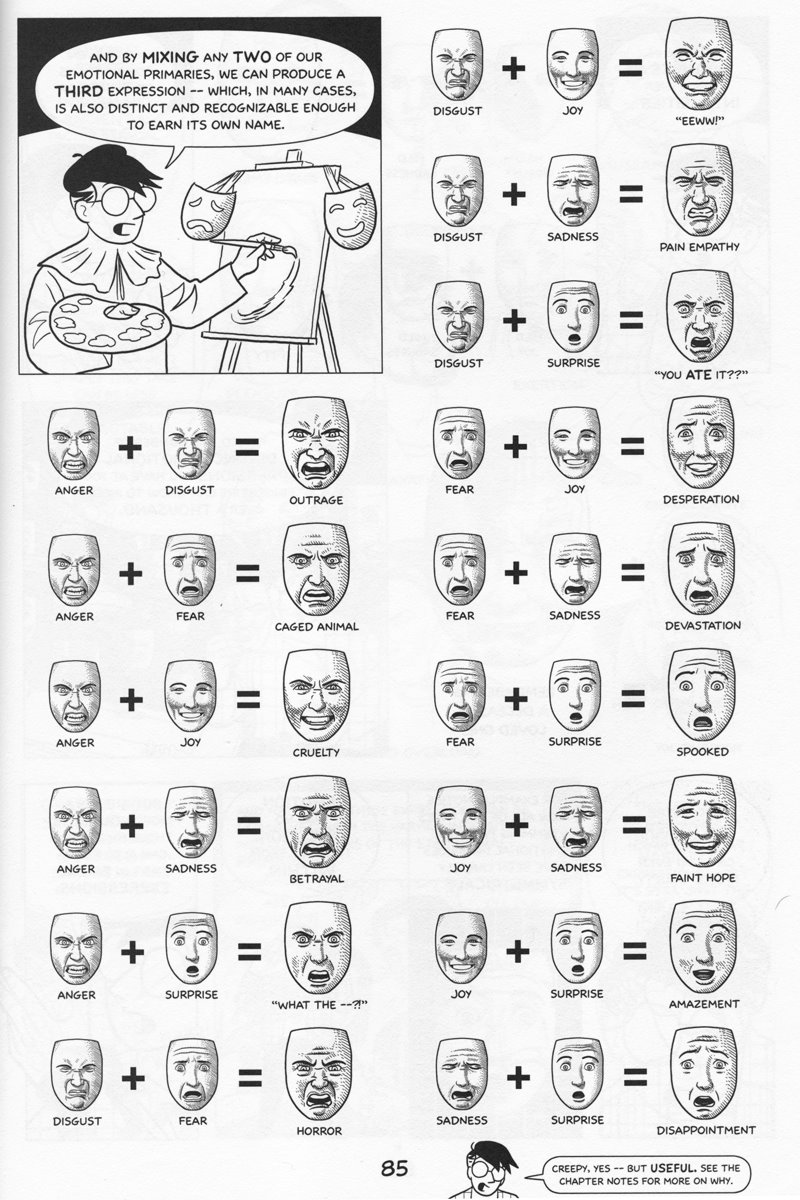 This is a page from the wonderful “Making Comics” by Scott McCloud. (Yes, emotions are complex! See some more of Scott McCloud’s pages about emotion in comics)

Most of the time, people don’t get angry suddenly, even though it might seem like that from the outside. Instead, they’ve been bottling up feelings for a while, and at some point, a small trigger is enough to make the bottle overflow. The reasons for bottling up feelings can be as diverse as people:

These are just some examples I can come up with in 3 minutes, the list is non exhaustive.

When someone’s bottle overflows, their peers can be confused and not know how to react to what they perceive as a sudden outburst — while what they are seeing might just be the other person’s first time tentative of saying “no” or “stop”. Oftentimes, the responsibility for the situation is then put on the shoulders of the person who supposedly “exploded”: they have been behaving differently than usual or not within the expectations, right?

Well, it’s not that simple. Conflicts are relational. The other party might have ignored signs, requests, feelings, and needs of the angry person for a while. Maybe the relationship has been deteriorating since some time? Maybe there was a power imbalance, that has never been revisited, updated, questioned? Or maybe their bottle is being filled by something else in their life and getting too small to contain all the drops of suppressed emotions. People change, and relationships change. We cannot assume that because a person has accepted something for months or years, that they always will. I think that anger can be a sign of such change or need thereof.

A message has four sides… and that creates misunderstandings

Friedemann Schulz von Thun has created a theory, the four-sides model, that establishes four facets of a message:

Let me adapt Schulz von Thun’s example to a situation that happened to me once: I came to a friend’s house and I smelled some unknown thing when I entered the apartment. I asked: “what’s that smell?” I actually never bake, so I don’t know anything about whatever it is people put into cakes. I wanted to say: I don’t know what that smell is, tell me what it is? She replied: “You never like anything I do, my furniture gets criticized, my cake’s not right, and you criticize me all the time.” We ended up in such a big misunderstanding that I left her house 5 minutes after I arrived.

With Schulz von Thun’s model we can understand what happened here:

The speaker’s question “What’s that smell in the kitchen?” has four sides:

The receiver can hear the question with 4 different ears:

At this point, the receiver will probably reply: “Bake the cake yourself next time!”

Sometimes, we hear more strongly with one ear than with the other ears. For example, some people hear more on the relational side and they will always hear “You’re not good at …”. Other people hear more on the appeal side and will always try to guess into a message what the other person wants or expects of them. People on the autistic spectrum often hear better with the factual ear, and do not understand the other layers of the message.

Form and contents of a message

Getting back to anger, I think that it’s often not the contents — i.e. the factual facet — of a message that triggers our bottle to overflow, but the (perceived) intention of the speaker, i.e. the appeal facet.

For example, a speaker might have an intention to silence us by using gaslighting, or tone policing. Or a speaker wants to explicitly hurt us because that’s how they learnt to deal with their own feelings of hurt.

The actual relation between speaker and receiver also seems to play a role in how anger can get triggered, when we hear with the relational ear. There are many nonverbal underlying layers to our communication:

So, suppose person A offers to help person B, and what person B hears instead is their overprotective mother instead of their friend. Person A might be surprised to see B overreact or disappear for a while to get back their feelings of autonomy and integrity as an adult.

Or person C expresses she’d “like to handle problem X like this” while person D might well not hear this as a proposal to handle a problem, but as a decision made without involving her. Which might propel D back to her childhood in which she could also not take decisions autonomously. Then D might react like she would react as a child, slamming a door, shout, run away, freeze, or fawn.

So, whenever we hear a message, not only do we hear the message with four ears, but also, we hear it with our position, our needs, and our inner beliefs. And sometimes, our bottle is already full, and then it overflows.

At that point, I find it important that both sides reflect on the situation and stay in contact. Using empathy and compassion, we can try to better understand what’s going on, where we might have hurt the other person, for example, or what was being misunderstood. Did we hear only one side of the message? Do our respective strategies conflict with each other?

If we cannot hear each other anymore or always hear only one side of the message, we can try to do a mediation. Obviously, if at that point one side does not actually want to solve the problem, or thinks it’s not their problem, then there’s not much we can do, and mediation would not help.

The examples above might sound familiar to you. I chose them because I’ve seen them happen around me often, and I understand them as shared patterns. While all beings on this planets are unique, we share a common humanity, for example through such patterns and common experiences.