Workshops about anger, saying NO, and mapping one's capacities and desires

For the second year in a row, I proposed some workshops at the feminist hackers assembly at the remote C3. I’m sharing them here because I believe they might be useful to others.

Based on my readings about the subject and a mediation training, I created a first workshop about dealing with one’s own anger for the feminist hackers assembly in 2020. Many women who attended said they recognized themselves in what I was talking about. I created the exercises in the workshop with the goal of getting participants to share and self-reflect in small groups. I’m not giving out solutions, instead proposals on how to deal with anger come from the participants themselves. (I added the last two content pages to the file after the workshop.) This is why this workshop is always different, depending on the group and what they want to share. The first time I did this workshop was a huge success and so I created an improved version for the assembly of 2021.

The act of saying NO

We often say yes, despite wanting to say no, out of a sense of duty, or because we learned that we should always be nice and helpful, and that our own needs are best served last. Many people don’t really know how to say no. Sarah Cooper, a former Google employee herself, makes fun of this in her fabulous book “How to Be Successful Without Hurting Men’s Feelings” (highly recommended read!): 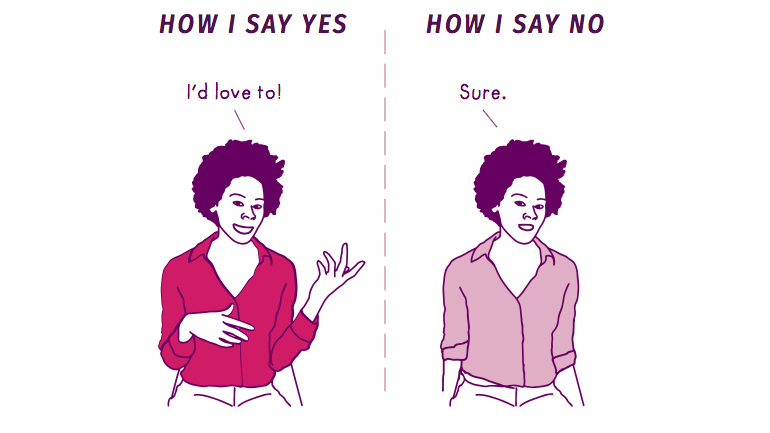 That’s why a discussion space about saying NO did not seem out of place at the feminist hackers assembly :) I based my workshop on the original, created by the Institute of War and Peace Reporting and distributed through their holistic security training manual.

I like this workshop because sharing happens in a small groups and has an immediately felt effect. Several people reported that the exercises allowed them to identify the exact moment when they had said yes to something despite really having wanted to say no. The exercises from the workshop can easily be done with a friend or trusted person, and they can even be done alone by writing them down, although the effect in writing might be less pronounced.

→ The act of saying NO workshop

Based on discussions with a friend, whose company uses SWOT analysis (strengths—weaknesses—opportunities—threats) to regularly check in with their employees, and to allow employees to check in with themselves, I created a similar tool for myself which I thought would be nice to share with others. It’s a very simple self-reflection that can help map out what works well, what doesn’t work so well and where one wants to go in the future. I find it important to not use this tool narrow-mindedly only regarding work skills and expertise. Instead, I think it’s useful to also include soft skills, hobbies, non-work capacities and whatever else comes to mind in order to create a truer map.

One important feedback point I got is that people felt the time for the exercises in all three workshops could have been longer. In case you want to try out these workshops, you might want to take this into account.

23-03-2022
← On anger, misunderstandings, and hearing with different ears How do kids conceive the internet? →